I've recently re-entered the world of "online dating". That phrase is in quotes, since it is mostly "online looking" for me; very little dating happens. I tried this last year for a few months and got dozens of "winks" and messages within a few days, so many that I started coming up with arbitrary reasons to cross people off my list. Went on just one date and then shut down my account because I can't take rejection. Being rejected isn't a delight, but being the "rejector" is absolutely excrutiating. No matter how gently it is done, one always feels like a big jerk. Now I've decided to try online dating again and so far the experience is less overwhelming and creepy than before.

If you are a woman, I can't tell you what to put on your profile but the advice I was given was to take this opportunity to be completely honest. This is your chance to "get it all out there". In my area, the men seem to tremendously outnumber the women, so I've tailored my profile to scare people off. It's helping both in the quality and creepiness departments. Apparently, satire attracts a higher quality of gentleman.

Some websites now offer the service of completely writing your profile for you. That doesn't seem quite right or fair. Who would be impressed with a guy that engaged someone else to write about the one topic he should know best? What I think is in order is a service that will look at your profile and say "What the hell are you thinking!?" then provide pointers for getting a woman to actually read it. So many profiles have one or two fatal flaws that are such turn-offs most women won't even consider the guy as a potential date. And it probably isn't your fault; it's caused by a simple disconnect between what men think women want and what many of us actually do want.

Disclaimer: I have no idea what most women want in a man or anything else, and suspect my own criteria is rather bizarre and highly unreasonable. But if you want to know what a lefthanded woman with a cool job, two cats and the most fabulous friends thinks when she looks at your online dating profile you have come to the right place.

Profiles that address what they don't want in a date are really off-putting and seem bound to attract bad karma. That's why this information is appearing here rather than on my actual profile. Here are my top 10 reasons for rejecting a potential date:


#1 No picture on the profile.

Causes suspicion that the person is either married or extremely unattractive. Sure, there are other reasons to obfuscate one's image, but since most of us risk terminal embarrasment by putting our picture out there for everyone to see, it seems unfair when someone else does not. Also, there is no kind way to ask someone for a picture then reject them after they send it.

Mentioning Loneliness, Second Chances or anything else that elicits pity is just a terrible idea. Women aren't looking for someone that seems pathetic. Names containing the words Back Rub, Cougar, Sex or Nasty are downright creepy. Yes, I have seen all of these.

#3 Looking for your "Special Lady" or "Forever Partner"?

This phrase appears all over dating sites. Ugh! Some women probably like it, but I haven't met one yet. It suggests a guy is willing to jump into a relationship with the next woman he sees, and that's enough to send most of us running for the hills.

When a person lists their salary on the internet one has to wonder a bit about their judgement. All the world can see these most of these sites so a bit of discretion is advisable. It doesn't result in an automatic rejection, but it does give one pause for thought regardless of how high or low. If it's very high then one wonders about a few things. Is it accurate or a way to try and impress? Is the gentleman looking for a woman that loves him for his money? Is overly pre-occupied or impressed with his wealth. If it's low then does the guy possess ambitions? Either way it's just uncomfortable to see. Salary info is better saved for a time when a relationship has matured a bit.

#5 Shirtless Pictures, Pictures of your Car, and Sometimes self portraits.

Shirtless pictures scream looking for sex. No matter how "ripped" you are, keep your shirt on fellas. Pictures of your car can make it seem you are looking for a trophy that values you for your earning potential rather than you. Self-portraits are tricky. They have the potential to be endearing, but also can seem a bit lame.

#6 Pictures that include unnamed women

Who are these women? Your last match date? And did they give you permission to post their pictures on an online dating site?

#7 Pictures with women obviously cut out

That makes us wonder if we are destined for a similar fate "Oh, he just cuts them right out of his life when he's done with them."

Nothing turns a woman on like receiving a message that says "Your Hot." Take a few minutes to run spell check so it appears you are actually interested in making a decent impression.

#9 Mentioning prior relationships too soon

One guy man mentioned his ex-wife and his ex-girlfriend in his profile, then again in an email exchange. So I asked how long he'd been single and learned it was less than a month, but "I'm ready to move on." He may well be ready, but most women aren't interested in being anyone's rebound girl.

#10 Badly written email messages
This could be a topic of it's own. By "bad" I mean recycled, creepy, unimaginative and beyond. My favorite example is the one I received containing the lyrics to the Gershwin song Someone to Watch Over Me saying "Your profile reminded me of this song." He either didn't read my profile at all, or just sends that to everyone. I couldn't decide if he was trying to provoke me, or truly thought I was a "little lost lamb." It's probably tough to find a good balance between getting someone to read the message and being annoying or outlandish, but this guy completely missed the mark.

My best advice is to have a female friend check out your profile and give honest feedback. Good luck! Online dating isn't for the feint of heart.
Posted by Hanna at 9:44 AM 2 comments:

My recent introduction to the documentary Grey Gardens, the story of Jacqueline Kennedy's aunt and cousin who lived in dilapidated splendor in East Hampton, resulted in a bit of an obsession. I'm in good company as some close friends actually named their new kitten after Little Edie Beale. I also took the DVD on vacation to New Orleans where I played it any time we were in our rooms.  Two friends that were along repeatedly said "Are you watching that again?" then promptly sat down mesmerized each time, while the fourth in our party simply gazed in wide-eyed, undisguised fascination at the scenes playing out on the screen. I wrapped scarves around my head and tried to speak like the younger Edie.

Dressing for Halloween isn't top of my list, but I'd been looking for an excuse to remake myself into Little Edie wearing her "best costume for the day". When told of my plan most people asked "Will anyone know who you are?" It didn't matter because anyone that did know would get such a kick out of it that it would make up for the blank looks of everyone else.

It's a simple costume, so I had much of what I needed already.  The wrap for my head and the sweater are items I owned, along with the shoes. I found a pin similar to hers at a 2nd hand store and the skirt is one of those 1970s wool wrap things, which I thought kind of looked like a salvaged slipcover from an old couch or chair.  The shorts underneath are grey workout shorts.  I did not, as she described, pull the panty hose up over the shorts but wore them underneath since that didn't sound comfortable.  The following year I wore the same costume but took along an old ripped mink since it was cold. 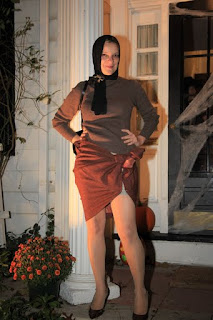 After seeing the documentary film Edie declared it a classic. As delusional as she must have seemed at the time, having a Broadway musical and an Emmy Award winning HBO Movie created about her and her mother certainly gives proof to her point. After hours of walking and talking like Edie, something clicked and I didn't want to stop. She was indeed fabulous and I hope she would have been delighted by my emulation of her in the revolutionary costume.
Posted by Hanna at 4:26 PM 1 comment: